Pilgrims and Puritans are not interchangeable terms, nor is one a subset of another. They shared a common faith, the Anglican Church (aka Church of England) and, as colonial neighbors, often collaborated. Both believed in purifying and simplifying Anglican practices and that Scripture was the guiding source for a community’s moral codes. Both groups also advocated literacy, so that each person could read the Bible.

Pilgrims settled Plymouth Colony beginning in 1620 with the arrival of the Mayflower. They continued to settle Plymouth towns into the 1630s.

Pilgrims insisted state and church should be separate, and were known as Separatists. To be clear, as an astute reader pointed out, the Pilgrims earned the name Separatists because they had dissociated with the church of England — not simply over their stance that church and state not bleed into one another’s activities.  At this point, we can’t go much further without clarifying a few things. Not all passengers on the Mayflower were religious dissidents. The passengers who left England to separate from the Church of England referred to themselves as Saints. The Saints referred to the other passengers as Strangers. For our purposes here, we’re referring to both groups as Pilgrims.

Alternatively, Puritans wished to “purify” church practices while remaining within the Church of England, believing government and church had some necessary interdependence. They were known as Non-Separatists.

Pilgrims valued democratic principles. For them, while religious authority should be based in Scripture, it should also be justly practiced. In Plymouth Colony, leaders did not lord themselves over their neighbors.

An illustration of this last difference is the infamous witch trials. In Salem and other Puritan towns, neighbor turned against neighbor and moralistic juries took gossip as gospel. But accusations of witchcraft in Plymouth Colony were rarely brought before the courts, and when they were, hysteria did not break out. 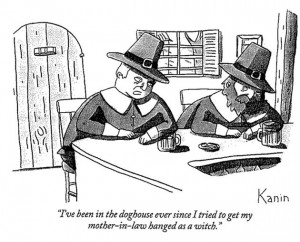 Finally, there is a significant demographic difference. In 1640, Plymouth Colony had approximately 2,000 residents while Massachusetts Bay had at least ten times as many. Therefore, Puritans outpaced Pilgrims in emigration and, by 1691, Plymouth Colony was formally absorbed into Massachusetts Bay. The new English colonial government was known as the Dominion of New England. This short video from History.com also illustrates differences between Pilgrims and Puritans.

Pilgrim Fun Facts: The Pilgrims were not actually known as Pilgrims until the late eighteenth century. Because membership in a separatist congregation was considered a high crime against the state (Deetz, The Times of Their Lives, 32), our religious Pilgrims literally separated themselves from England in 1609 and took refuge in Leiden, Holland, an escape as harrowing as the voyage they would take eleven years later on the Mayflower. (Deetz, 32-33). That’s right — the Pilgrims did not set out from England on their journey to the New World; they started in Holland. Unless, of course, you’re talking about the group of non-Separatists who DID join the Mayflower in England on its way to New England. Forty-one Mayflower men signed the Mayflower Compact, Saints and Strangers alike, so it seems fair that the Strangers should get as much credit for their role in founding our great nation as “the left wingers of the Puritan movement,” the Separatists (Samuel Eliot Morison). Now for the real question: Who was the first person to step foot on Plymouth Rock?