Beyond the questions of Alice Martin Bishop’s (AMB) parentage and origins (and that of her husbands), one question that haunts AMB researchers is what happened to Abigail Clarke — Alice’s oldest daughter — after her mother’s execution. Through all of our research, we haven’t found anyone who has been able to place Abigail after 1649, when the PCR notes that John Churchill was appointed to sell her father George Clarke’s house for her “use and good” (vol. 2).

This order, in fact, is the only reason we even know there was an Abigail. The only mother-child relationship for Alice that we have direct evidence for is that of Alice and Martha, which is specified in the PCR’s account of Martha’s murder and Alice’s conviction. As we’ve discussed before, no mention is made of Abigail or Damaris (Alice’s youngest daughter) by Rachel Ramsden during her two visits to the house that day, or by the coroners, who arrived later.

But Abigail is mentioned in the PCR the following year, in May 1649, as the daughter of George Clarke. John Churchill, of Plymouth, is ordered to dispose of “the house and land [that heretofore] was George Clarke’s for the use and good of Abigaell Clarke, daughter unto the said Gorg Clarke.” If we assume this is our George Clarke — and we haven’t yet found any other George Clarkes in Plymouth at that time — then we can confidently assume that this Abigail, who several months after Alice’s execution needs someone to provide for her, was a daughter from his marriage to Alice.

Someone, at some point, guessed Abigail’s birth date to be about 1641/1642, and that is the date used in all accounts of Abigail and AMB that we’ve found so far. It’s an interesting calculation, as it comes two years after George and Alice were married, a length of time longer than the average wait for a first child, but maybe there was an infant who died before Abigail was born.

Abigail’s appearance in the PCR then was the first and last sighting we had of her, until several weeks ago when Erin in Oklahoma and Kristin in California found the exact same thing on the exact same day — Abigail in 1662, about age 20, attesting under oath to the will of John Churchill, the same John Churchill who sold her father’s house for her 13 years earlier.

John Churchill’s will and probate inventory are included below, and give us some insightful details about his family and his standard of living. At the time of his death in 1662, he had what sounds like plenty of land, a new house and an old “Dwelling” house, a variety of oxen, cows, heifers, steer, and what, in the opinion of this amateur probate inventory analyst, seems like an average panoply of household items.

The PCR fills in a lot of gaps. Unlike the Clarkes and Bishops, John Churchill seems to have stayed out of trouble, because the only times he appears in the PCR are in regard to vital records. He is listed as able to bear arms in 1643 (the same year as George Clarke and Richard Bishop), so he would have been at least 21 years old then. He married Hannah Pontus December 18, 1644. The first child whose birth is recorded in the PCR is daughter Hannah, born November 1649, followed by son Eliezer in April 1652 and daughter Mary in August 1654. However, John’s will mentions three other sons — Joseph, John, and William — and they were likely born between 1645 and 1648, the window between John and Hannah’s marriage in late 1644 and the recorded birth of daughter Hannah in late 1649. (This is also the timeframe that encompasses Martha’s death, Damaris’s birth, Alice’s execution, and the sale of George’s house.) In 1651, he was one of the “Freemen admitted this Court, and sworne,” another sign of his good standing.

Other mentions of the Churchill family in the PCR include marriages of their children and births of grandchildren, but there’s nothing more of Abigail.

John’s nuncupative will can be found in Plymouth Colony Records Volume 1, Wills and Inventories 1633-1669, dated March 3, 1662. “Nuncupative” means it was delivered orally, and it was Abigail who swore to its authenticity. “Abigaill Clarke” is said to be “aged twenty years or thereabouts,” an age which matches exactly a birth year of 1642. (Perhaps the reason that her birth year has always been given as 1642 is because someone found this same evidence years ago?)

John Churchill is also referred to as her kinsman, which, in the seventeenth century, referred not only to blood relatives, but also guardian-ward relationships. John Churchill names his sons in his will, his wife, and his daughter Hannah, but there is no mention of the young Mary (only about six-years-old at the time), and there is no provision made for Abigail.

So, what happened to Abigail after 1662, and what was she doing between 1649 and the date of this will?

-Was she absorbed into the Churchill family at her mother’s death? Keep in mind that this family would have included up to four very young children by the end of 1649, the oldest of which might have been five years old, if that.

-Was Abigail already living with the Churchills when Martha was killed? This scenario would explain why no one mentioned her presence on the day Martha died. Sending children to live with other families — even as young as six — was common practice at the time, and may have alleviated a potentially stressful stepfamily dynamic in the Bishop household.

-The Plymouth Colony Records Volume 1, Wills and Inventories 1633-1669 also contains a will for John Churchill’s father-in-law, William Pontus, who died in 1652. He apparently had only two daughters, Hannah, John Churchill’s wife, and Mary, who was the widow of James Glasse. He makes no mention of Abigail in his will, so it’s unlikely that she was related to the Churchill family through Hannah Pontus.

-John Churchill, James Glasse, George Clarke, and Richard Bishop are all listed in the 1643 record of men able to bear arms in Plymouth. It’s not a long list, so it’s likely that these men and their families all interacted with one another and were possibly related to each other — we know that Churchill and Glasse were married to the Pontus sisters.

-Are George and Abigail related to the Churchills?

-Why was John Churchill appointed to play the role he did in selling George’s house for Abigail’s support?

-Who were John Churchill’s parents?

-Why would Abigail, a young, unmarried woman, be asked to attest to John Churchill’s will? Does this imply that she was a trusted member of the family? Or was it because she was treated more like a servant?

-Why didn’t John Churchill leave anything to Abigail in his will?

-Since we have no record of Abigail marrying anywhere, did she stay and care for John’s wife Hannah or another member of the Churchill family? She would have been older than all of the Churchill sons, although not by much. But her name doesn’t show up in any list of marriages we have for that time period.

A week or so after we found John Churchill’s will, Erin found yet another mention of Abigail Clarke, in the Records of the Town of Plymouth (published 1889). In 1636, a law was passed that required men to report the branding mark they used on their cattle. In the section listing the branding marks for the year 1653, the book mentions “Abigaill Clarke a half moone on the right eare” (vol. 1, p.2). So at age 11 or 12, Abigail had cattle that were considered hers. Did these come from the sale of her father’s house? Or maybe even from Alice and Richard’s “estate,” since Richard seems to have moved to Eastham shortly after Alice’s execution?

As usual, our new information has led to more new questions. But we have a wide new canvas to explore, and although we can’t locate Abigail beyond 1662, it’s nevertheless a relief to know she made it through childhood. 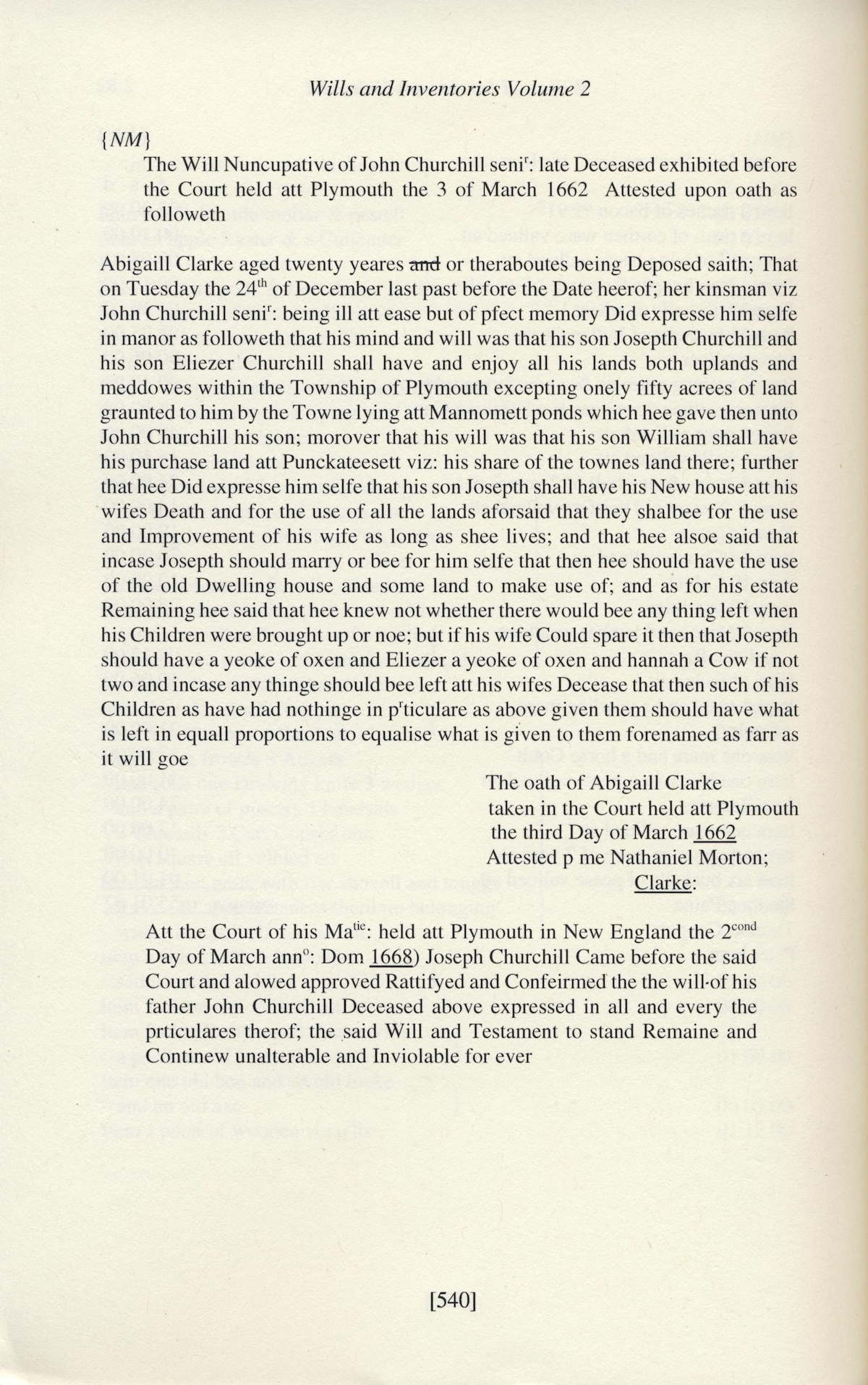 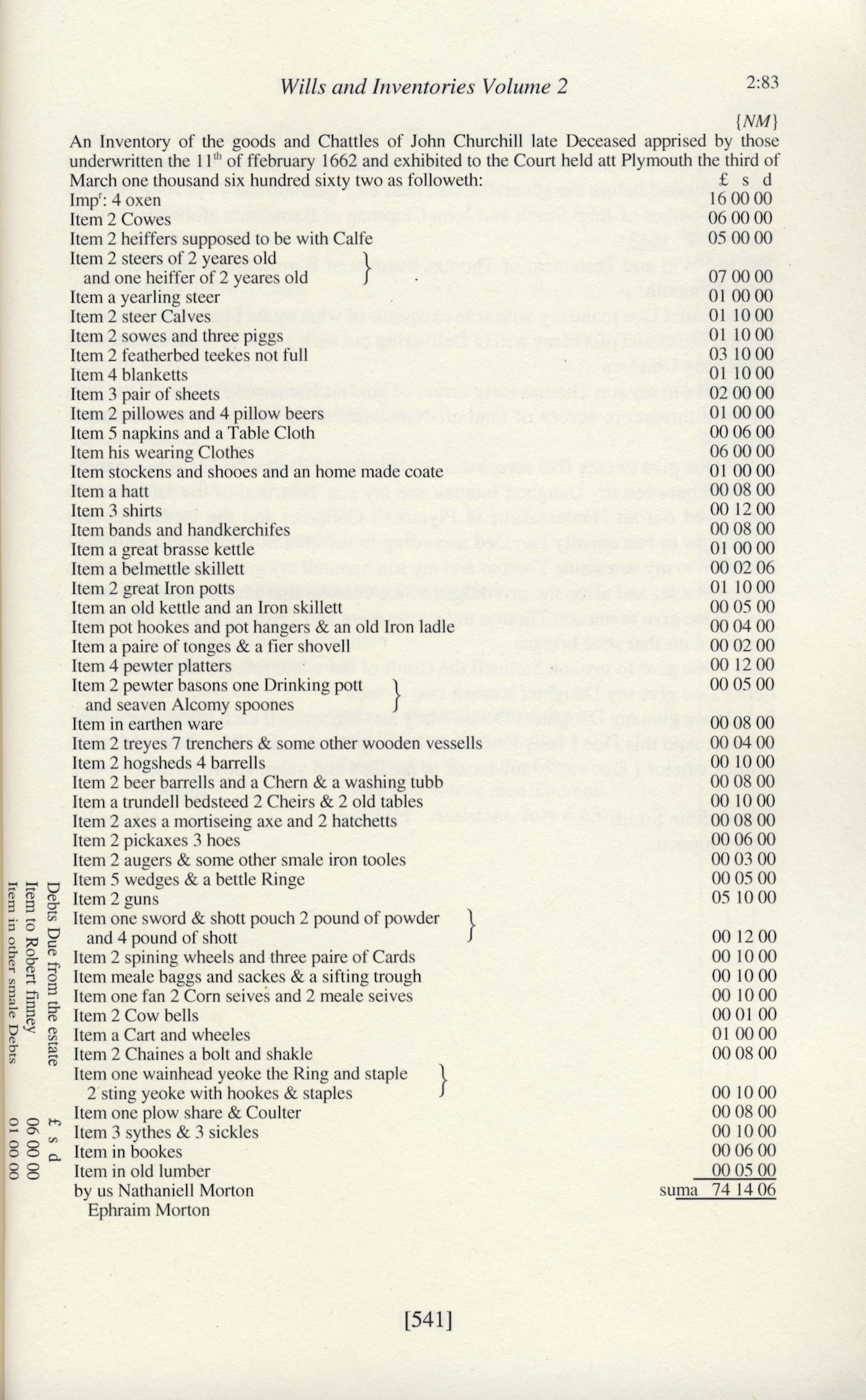 One thought on “Abigail as a Young Woman”