We are always on the lookout for the pre-Plymouth origins of our main characters, Alice Martin, George Clarke, and Richard Bishop. The more we research and learn, the more real these people become, and certain discoveries can be as titillating as any 21st century gossip. It was this kind of excitement that passed between Erin and me via text message, when I mentioned my latest find — that Edward Doty’s wife was named Faith Clarke. “GTHO” Erin texted back moments later, and after I figured out what “GTHO” meant (“Get the hell out!”), I realized that she was just as delighted as I was.

If you look back at Erin’s piece on The Elusive George Clarke, you can read about Clarke’s disputes with Doty, and why Doty’s marriage into a Clarke family is potentially significant.

The records indicate that the two were likely farming neighbors as Clarke drags Dotey into court claiming the latter is denying him access to his lands (PCR, vol 8., October 1637). In June of 1638, Dotey is fined for physically assaulting Clarke (vol. 1), and the bad blood continues for another four years, when Clarke is ordered to pay Dotey four bushels of corn for some infraction (vol. 2, February 1642).

If George and Faith were siblings, Doty’s and Clarke’s disputes over property lines could be explained as mundane in-law squabbles. Eugene Stratton, in Plymouth Colony: Its History & People, points out possible hostilities between Doty and his in-laws when, on “4 January 1641/42 the court settled differences between Doty and Thurston Clarke (father-in-law or brother-in-law?) by ordering Clarke to pay corn and money to Doty (PCR 2:30)” (Stratton, page 284). However, Doty had issues with many different people, most of whom were not named “Clarke.”

Faith Clarke’s origins are clearly detailed in Robert Charles Anderson’s profile of her family in The Great Migration: Immigrants to New England, 1634–1635 (vol. II, 99–101), and I read eagerly, hoping to find mention of her brother, George. In 1634, at the age of 15, Faith sailed with her father, Thurston, from Ipswich, England to Plymouth, Massachusetts on the Francis. 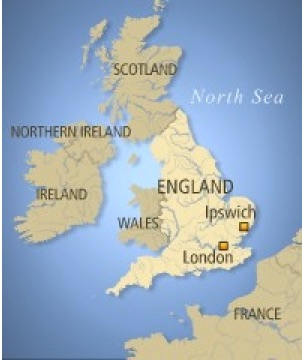 Faith’s father Thurston was born about 1590, and he and his wife, also named Faith, had the following children:

Wait a minute — where’s George?!? Dang it! Maybe he was somehow overlooked.

I found more information about the Thurston Clarke family in the New England Historical and Genealogical Register, Genealogical Research in England, July 1915, page 253, and hoped to find mention of a relative named George in that journal. Sadly, George wasn’t there either, but the details I did find were interesting.

Daughters Frances, Mary, and Abigail Clarke died in England before the rest of the family migrated to Plymouth. Frances died at two months, Mary at one month — having been killed, according to the court record, by Anna Puse, “by inchantments, withcraftes & charmes.” Abigail Clarke died in 1636/7 at the age of 11, and it’s believed that Thurston Clarke’s wife and sons traveled to Plymouth then.

Both sons are described as having a disability or disabling condition, the register calling them “imbeciles” and the PCR “impotent” (the term here referring to the one used in English poor relief — the impotent poor — meaning someone who could not provide for him or herself). But Henry and Thurston Clarke aren’t poor; when their mother dies, in 1690, they inherit three-fourths of her estate. However, the Plymouth Court ordered “by reason of their age [at that time they would have been 61 and 63], indiscretion & weakness of understanding, [Henry and Thurston] are incapable of making necessary provisions for their own support, sustenance, and livelihood.” John Dotey, their nephew, was ordered to manage their estate to provide for their needs (Anderson, The Great Migration, vol. II, 99–100).

So when Edward Doty married Faith Clarke in January 1634/5 — two years before he first confronts George Clarke — her family would have included only her parents and two younger brothers, neither of whom, it appears, would have been able to live independently and provide for themselves.

The proximity of George Clarke’s land with Edward and Faith Clarke Doty’s suggests a possible family connection, but there is too much detail provided on Faith Clarke’s family to think (hope) that George had somehow been overlooked as a sibling.

But maybe he was a cousin, trying to curry favor with his uncle Thurston, knowing that Thurston’s sons would never be able to work their land. Consider that several years after Thurston’s daughter Abigail Clarke dies, George Clarke names his own daughter Abigail.

But then, why would our Abigail Clarke have gone into the care of John Churchill and not the Thurston Clarkes or Faith Doty, if her father George were a relative? (At the time of Alice’s execution, Faith Doty was the mother to seven children under the age of 12, so that might have provided their excuse.)

I don’t think we can completely discount a family connection, but if it did exist, they weren’t close enough to take in George’s orphan. Disappointingly, this new Clarke lead doesn’t give us information about George’s origins, but we do learn about one of Alice’s neighbors — Faith Clarke Doty — and add a new personality to our cast of characters.