The Plymouth Town Records tell us that in 1653, “Abigaill Clarke” registered “a half moone on the right eare” as her unique branding mark, to identify her cow from other wandering Plymouth bovine (vol. 1, p. 2).

For some reason, I’m having trouble getting the image of Abigail and her cow out of my mind. It’s a poignant picture I’ve been creating, of the lonely 12-year-old orphan with no one to love — or to love her back — but her cow. (I don’t know if cows show affection, but if Abigail fed it, it was probably glad to see her. My Oklahoma cousin Erin, somewhat of an expert, tells me: “They will nuzzle you if you show up with oats, but they aren’t going to spoon you in bed or validate you.”)

Cattle were plentiful in New England in the 1640s, to the extent that their value had dropped significantly by the time the Great Migration began to peter out in the early years of that decade. But while their value as a trading commodity decreased, they still played an important part in the daily lives of Puritan families — cows for dairy and breeding, gelded males primarily for draft work (Chartier, see below).

Cows and other livestock show up frequently in the wills and probate records of the time. On a different side of my family, my 12x great grandfather William Dennis left a black cow to be shared between his three grandchildren, the Pilgrimmy-named Remember, Dependance, and Experience Leichfeild (Plymouth Colony Records, Wills and Inventories, vol. 2, 311). And John Churchill (whom Abigail refers to as her “kinsmen” when she attests to his will in 1662) leaves two of his sons a “yeoke of oxen” each and his daughter Hannah “a Cow if not two” (Plymouth Colony Records, Wills and Inventories, vol. 2, 540). Some cows are even mentioned by name in the Plymouth Court Records; for example, John Combe of England sent a brown cow named Berry to Thomas Prence in 1639 (PCR vol. 1, p. 122).

The cattle present in 1627 Plymouth Colony included black, red, white-backed, and white-bellied varieties, and those were most likely the breeds present in 1653 — the black cattle called Kerry, and the reds, Milking Devon. Those are the types currently on display at Plimoth Plantation. 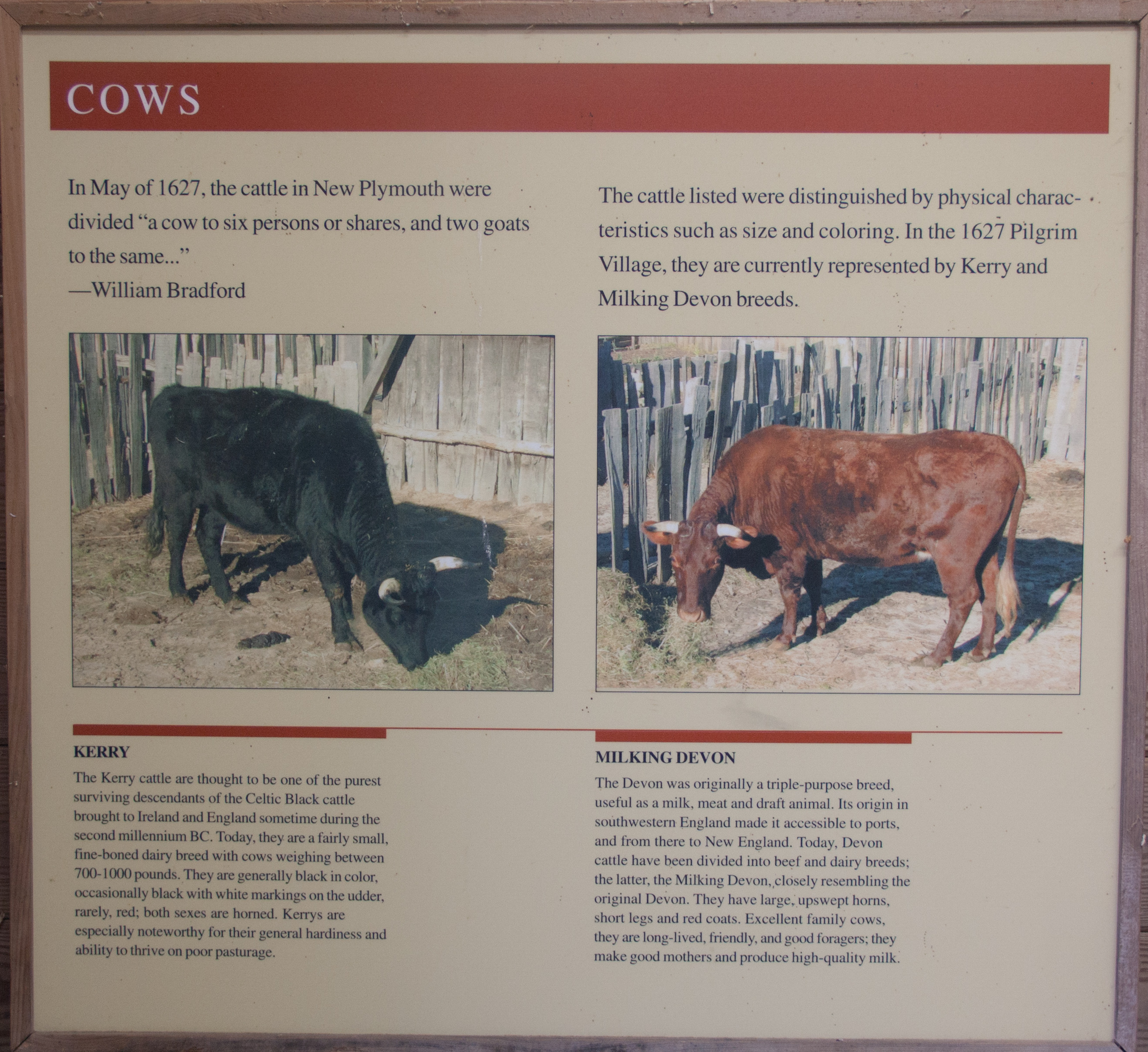 When you buy a stuffed cow at the Plimoth Plantation gift shop, you automatically adopt a Milking Devon Cow, and get this cool certificate: 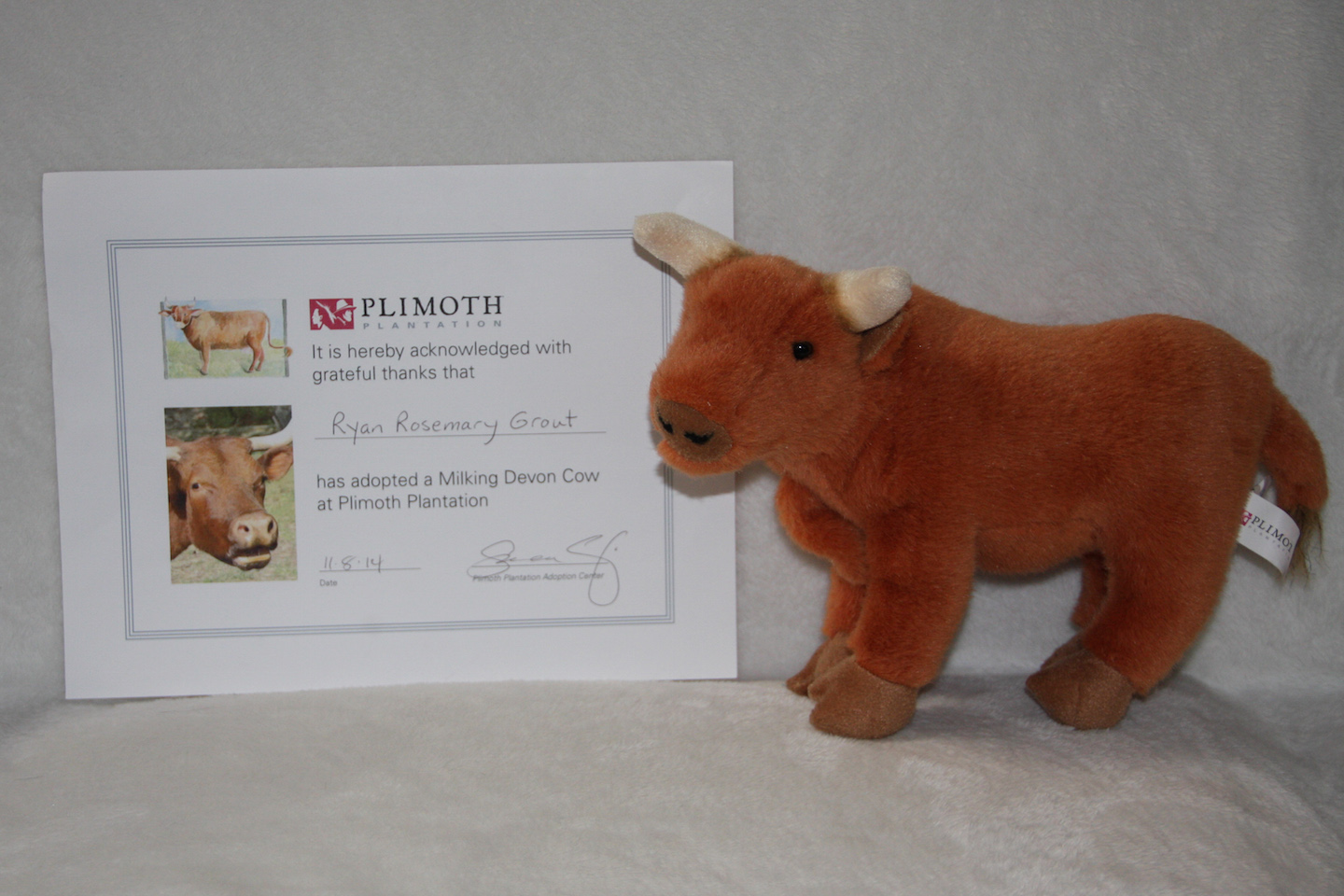 Abigail’s cow may have belonged to her father, George Clarke, which she would have inherited after her mother Alice Martin Bishop was executed in 1648, or one may have been purchased for her when John Churchill was appointed to sell George’s land and house for her use. In either of these scenarios, she could have been caring for her cow as early as the age of seven. However, her ear mark isn’t registered in the Plymouth Town Records until 1653, and the law that required individuals to register these branding marks was passed in 1636. Perhaps the law was followed casually — only a few dozen names appear in the town records, and John Churchill, whom we know owned cattle, is not named — or Abigail didn’t get a cow until she was 12.

In an exhaustive Plymouth Archaeological Rediscovery Project called Livestock in Plymouth Colony, Craig S. Chartier writes that “All types of cows were believed to be most productive from age three to 12 years old with the advice being given that one should not breed a heifer under three, that older cows give more milk and that after 12 years old the cows were no longer good for breeding.” Chartier got his information from 1614 agricultural historian Barnaby Googe. While Googe was probably not familiar with the harsh New England winters and other New World factors that might inform his advice, I am persuaded by his observations that Abigail’s cow could have been part of the Bishop household and still alive and productive in 1653.

One last possibility is that Abigail was given use of one of the town’s stock that was assigned to the poor. John Demos, in A Little Commonwealth, observes:

“Most towns … seem to have maintained a common stock of cattle, which were farmed out to various poor families. Each family would have the milk from such cattle for its own use, and some portion of “the increase” (that is, calves born in the meantime).” 80

However, a closer look at the Plymouth Town Records, where Demos got his information, reveals that the “Poores Cattell” were reassigned or redistributed yearly, depending on such factors as whether they had increased (or died), so it doesn’t make sense that those cattle would have received an owner’s branding mark. That being said, at least two of the men whose branding marks are listed are also listed as recipients of the poor’s cattle, but maybe that represents a fall in fortune. (One of those two, William Pontus, is the father of John Churchill’s wife Hannah, and appears in the poore’s list beginning in 1644.)

This reference to the poor’s cattle brings up another question: where were the town’s cattle kept? Cattle required a large area in which to graze, and wandering cattle were the cause of many conflicts between neighbors in Plymouth towns as well as those same Plymouth residents with the local Native Americans, whose corn crops were eaten and trampled. There are yearly references in the town records specifying who was to be paid to keep the town’s cattle, such as this one:

“At a Townes meeting held the xix Aprill 1643, It is agreed upon that John Smyth shalbe th Cowe Keep for this yeare to keep the Townes Cowes and shall have fourty bushells of Indian Corne for his paynes and a paire of shoes to be equally levyd upon every man according to the number of Cowes that they shall have kept by him and he is to keepe them untill the midle of November next” (Plymouth Town Records, 13).

But do the “Townes Cowes” refer to the cows that are branded, or the poor’s cows, or both? Another reference in the town records reads “the Townes stock of cattell called the Poores Cattell” (8), but it seems at cross purposes to charge the needy to keep a cow that you’re loaning to them to alleviate their circumstances. Maybe the “Poores Cattell” was a subset of the “Townes stock.”

Whatever the scenario, there seems to have been a real effort to keep cattle out of the town over the summer months, with people being fined if they kept oxen and young cattle “about the towne” during that time (Plymouth Town Recrods, 7). But some exceptions were made: “It is also agreed that only the milch cows and workeing beashs shalbe kept about the Towne and the rest to be remooved from the Towne in May…” (Plymouth Town Recrods, 5). It’s not clear whether “about the Towne” would be in a family’s yard, or a nearby field or meadow, but proximity would be important if daily milking were required.

At our visit to Plimoth Plantation last November, we saw several houses that had a large yard with room for cows to graze and shelter. The reenactors we talked to said that the dairy cattle would be kept in these locations, while the rest of the cattle would be moved about a mile or so out of town. 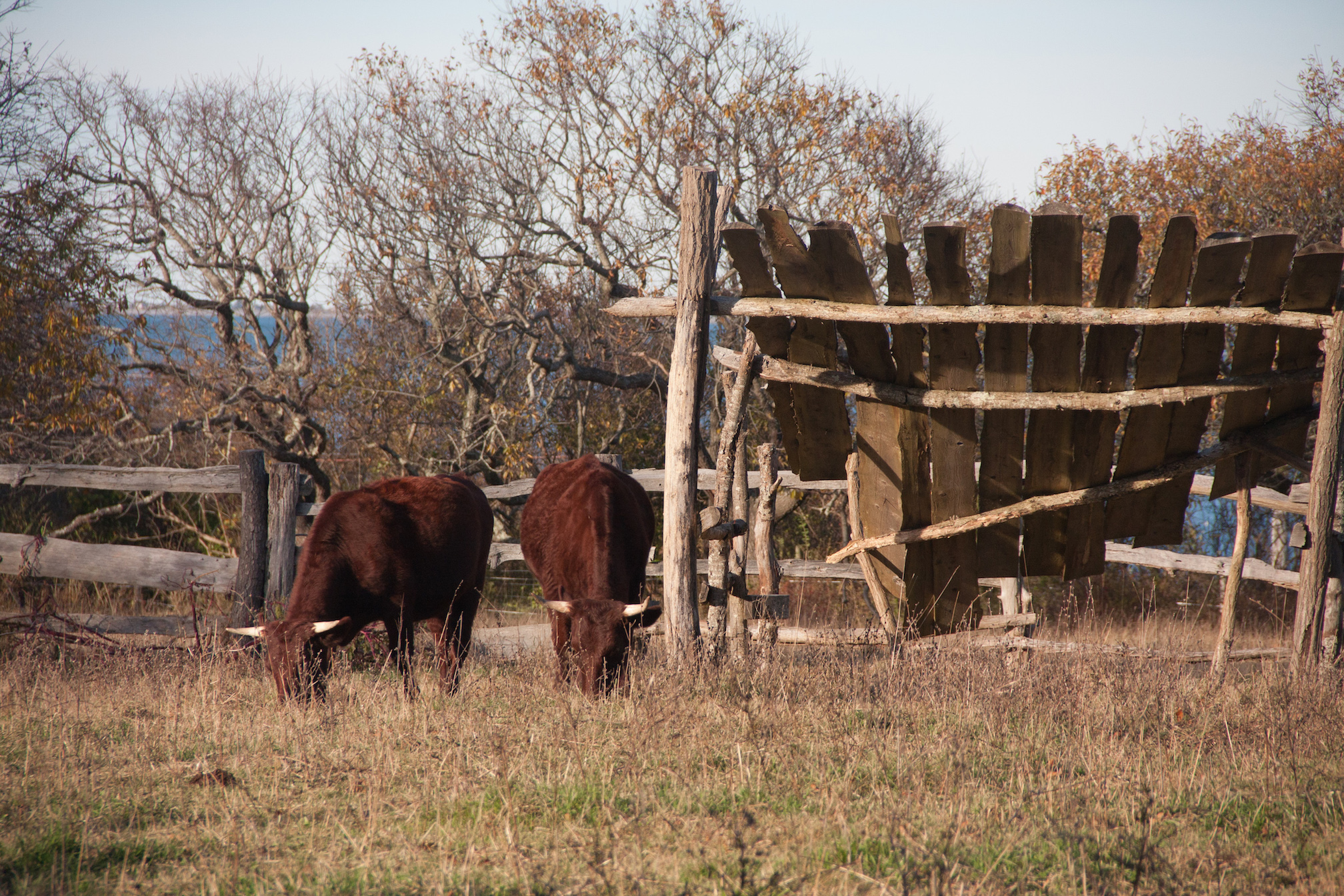 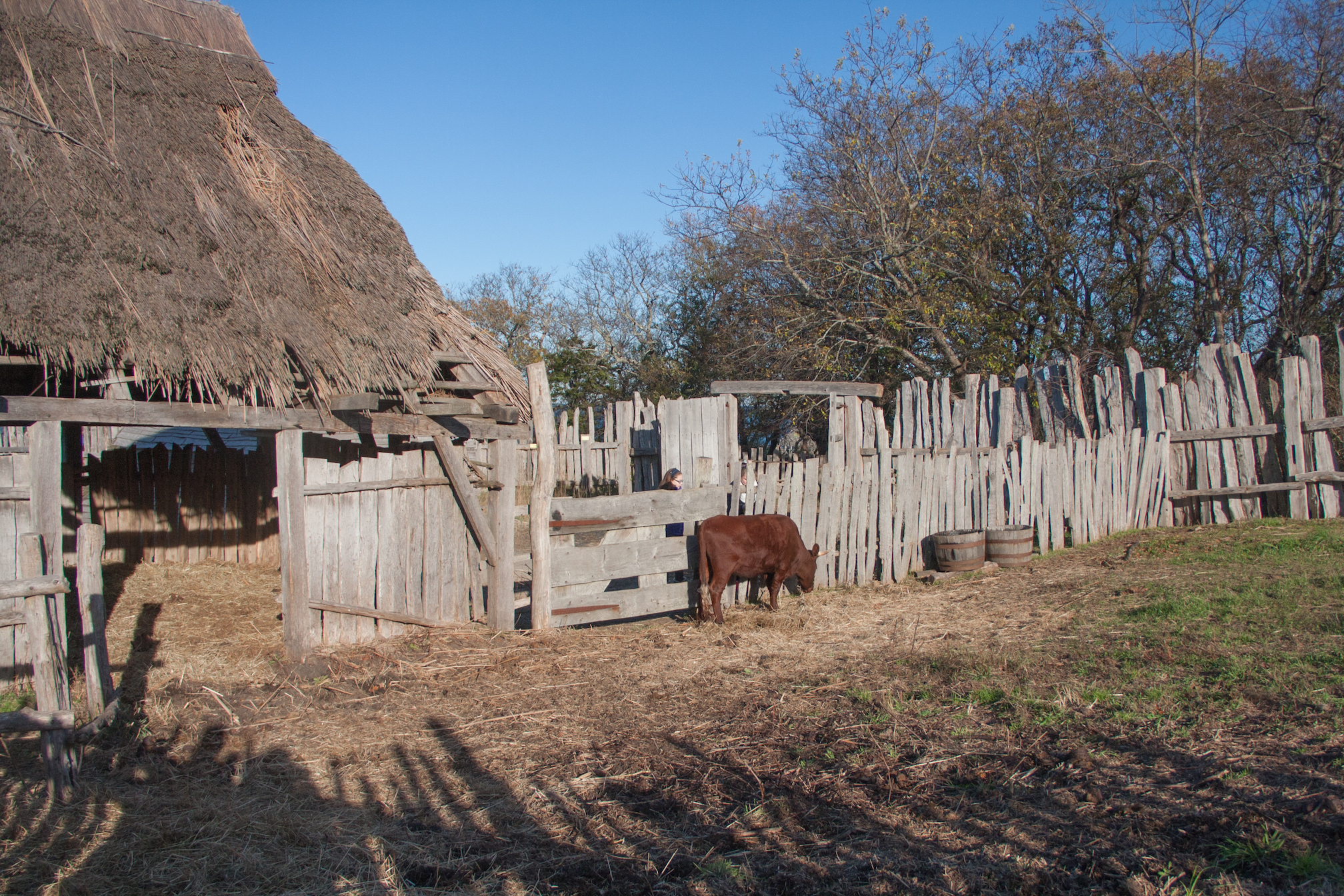 I’ve devoted many hours trying to figure out where Abigail’s cow was kept, when we don’t even know where Abigail lived at the time. But a good guess is that she lived with John and Hannah Churchill, whose family in 1653 would have included three young children. As a foster child/quasi servant who was several years older than the Churchills’ oldest child, Abigail no doubt spent much of her time tending to the younger children, and it must have been a relief to escape the confines of the house and the tedium of child care to feed and milk her cow.

I can imagine the solid, warm body of the cow — possibly the only living thing left from Abigail’s pre-orphaned life — giving her some comfort, and providing her an object on which to attach feelings of affection, as I’m doing now, almost 400 years later.

(Or, Abigail’s cow could have been a daily burden to her, nothing more than a smelly, stubborn barn animal, another chore in her long day and a constant reminder of the family she’d lost.)

At this point, it should be evident that I’ve spent way too much time researching colonial cows, when what I really want to learn more about is Abigail’s life after Alice’s death. But we have so little information about Abigail that any new evidence takes on enhanced significance, and it means a lot to know that in 1653, five years after her mother’s execution, a 12-year-old Abigail Clarke owned a cow with a half moon branded in its right ear.