Is this a likeness of Alice Martin Bishop? Many of our Martin cousins on Ancestry.com think so. And though some of those researchers obviously believe the curls, velvet choker, lace collar, and earrings all scream 1630s Puritan New England, I’m thinking, um, no.

There are hundreds, if not thousands, of Ancestry members who include Alice Martin Bishop (AMB) on their trees, and some of this information is legitimate — for example, many people include scans from the Plymouth Court Records (PCR) that document the investigation into her daughter Martha’s death and AMB’s subsequent conviction. Other documents that appear frequently are relevant pages from The Sutton Family website, the memorial found on Findagrave.com, and some of Erin’s earlier posts from this blog. But I’m struggling to figure out which Ancestry sources I can trust — many contradict each other — as I look for clues to Alice Martin Bishop.

One representative tree I looked at included a number of potential eureka items. Besides the photo above, this specific researcher (let’s call him Bradford101) included the photo below, and I wondered how he figured out that Alice Martin’s family came from the town of Billericay. So I looked at his other sources, to see if those offered any clues. 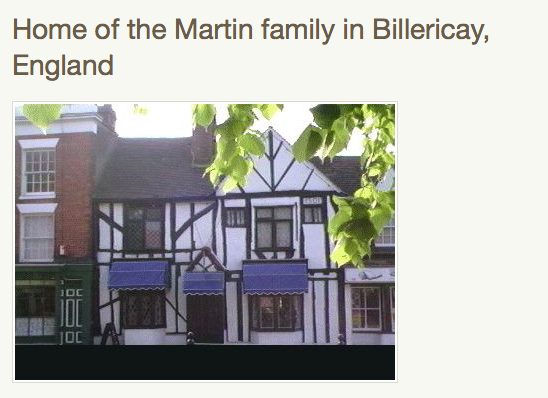 Bradford101 has three sources for Alice’s birth in 1620, one of which is the American Genealogical-Biographical Index (AGBI). I’m not sure exactly what this is, but when I checked its Reference source (James Savage, volume 3, page 163), I came up with different findings. 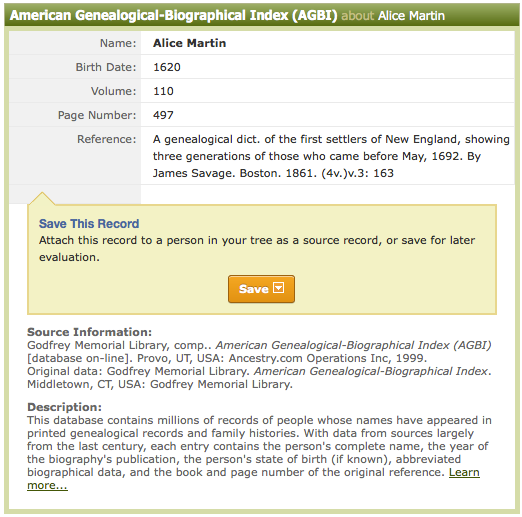 There are, in fact, two Alice’s on page 163, but neither of them is our Alice, nor is an age given for either: 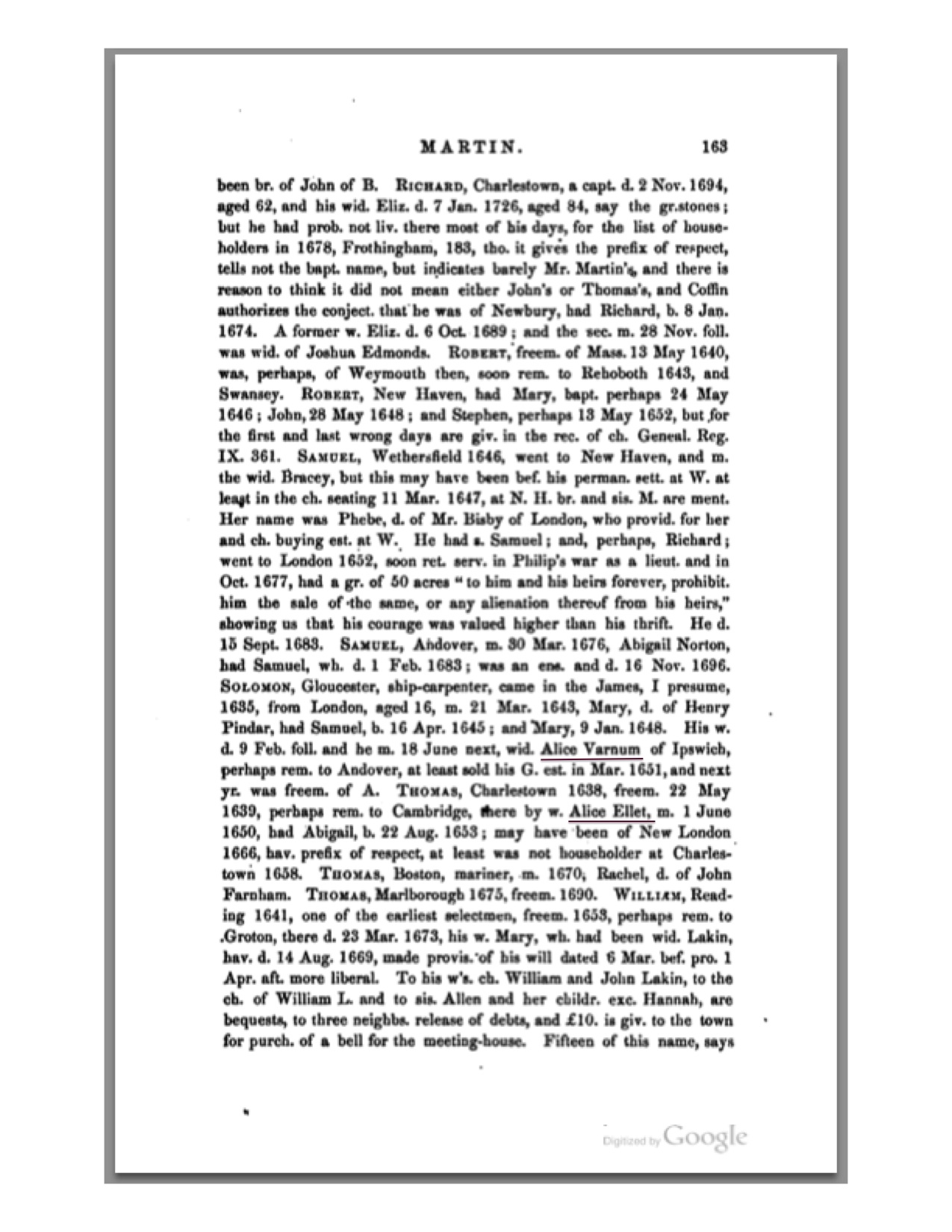 The two references to Alice Martin Bishop that I found in Savage are shown here. They occur in Volume 1, page 186 (regarding George Clarke) and Volume 1, 393 (regarding Richard Bishop).

Although I realized that the AGBI reference to Savage was incorrect, I decided to read Savage’s complete Martin entry, and that’s when I figured out why Bradford101 included the picture of the English home, above. Christopher Martin, of the Mayflower, came from Billericay, Essex, and Bradford101 believes AMB is the daughter of Christopher Martin and Marie Prower.

Bradford101 has two more birth sources for AMB, this time from Family Data Collections. These both show Alice as the daughter of Martin/Prower, but her birth date is different, 1616 instead of 1620. 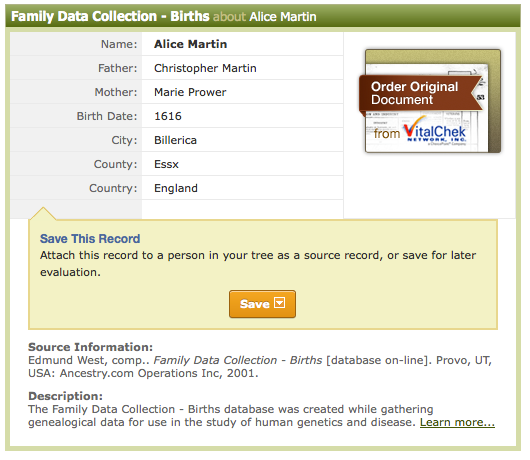 But didn’t the discrepancy between these birth dates — 1616 here, and 1620 in the AGBI — bother Bradford101? It bothers me. I also want to know who puts together these big databases of information, and which ones can we trust. And shouldn’t each researcher verify his or her findings by checking data against the cited sources, before putting it out there for other trees to pick up like some sort of fungus?

These are all newbie discoveries on my part — I’m sure most Plymouth Colony researchers know that Christopher Martin came from Billericay, and the next time I see that reference I’ll know why that town is being suggested as AMB’s home. In the first iteration of this blog, Erin did a formidable job arguing for AMB’s Mayflower connection, but the odds are just too great that our Alice was not overlooked as a passenger on one of the most famous ships in history, but rather came in quietly as one of the 20,000+ people who emigrated to New England in the 20 years after the Mayflower arrived.

We might still find important clues on Ancestry.com, but I’m finding that my time is better spent poring over the primary sources or cited references, even though Ancestry can definitely offer up some unexpected treasures, adorned in long ringlets and black velvet chokers. 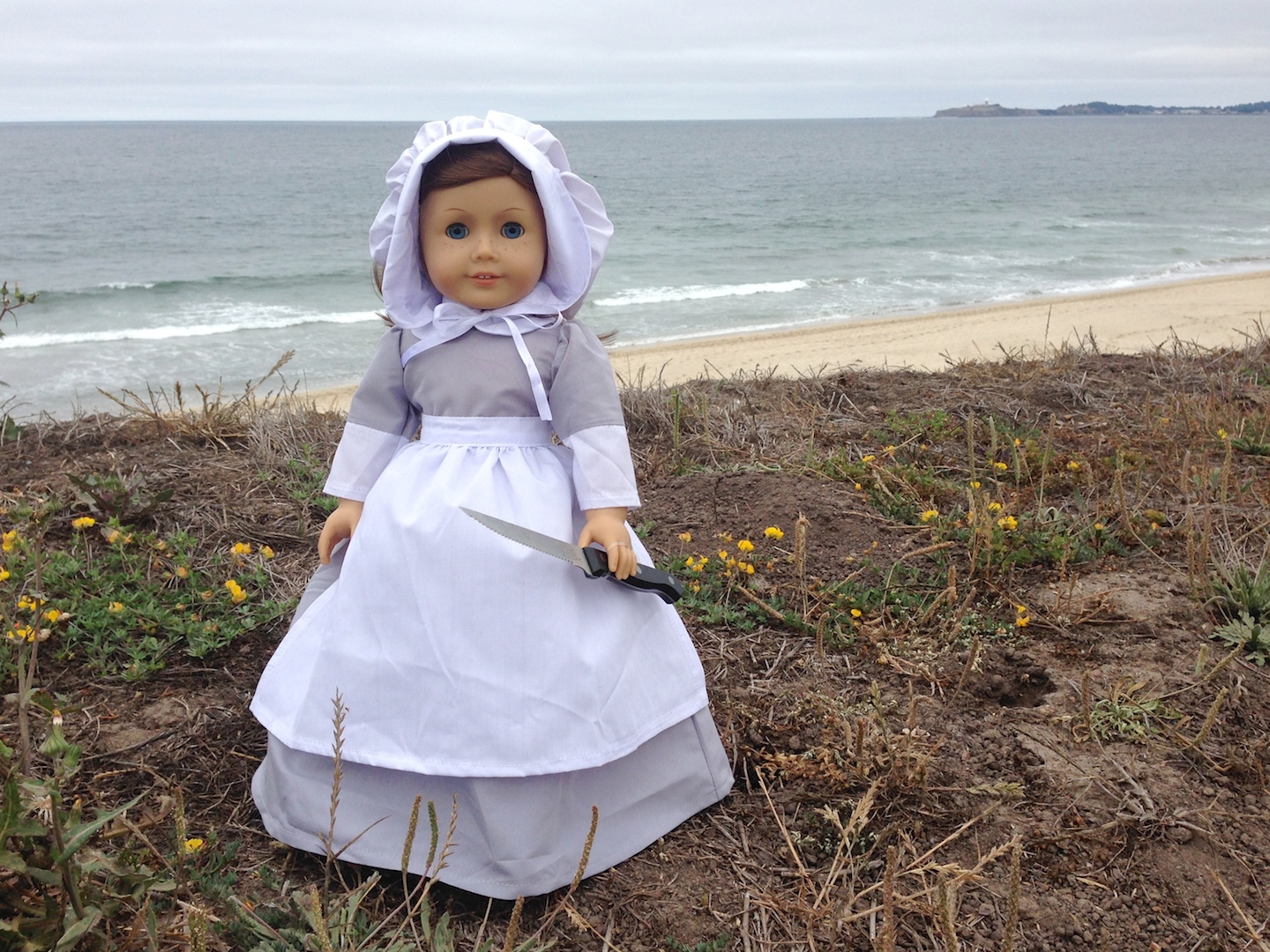 Note: The Alice Martin Bishop doll shown above is not authentic to the period nor is she approved by American Girl, but she makes us happy.

4 thoughts on “Lessons from Ancestry.com”